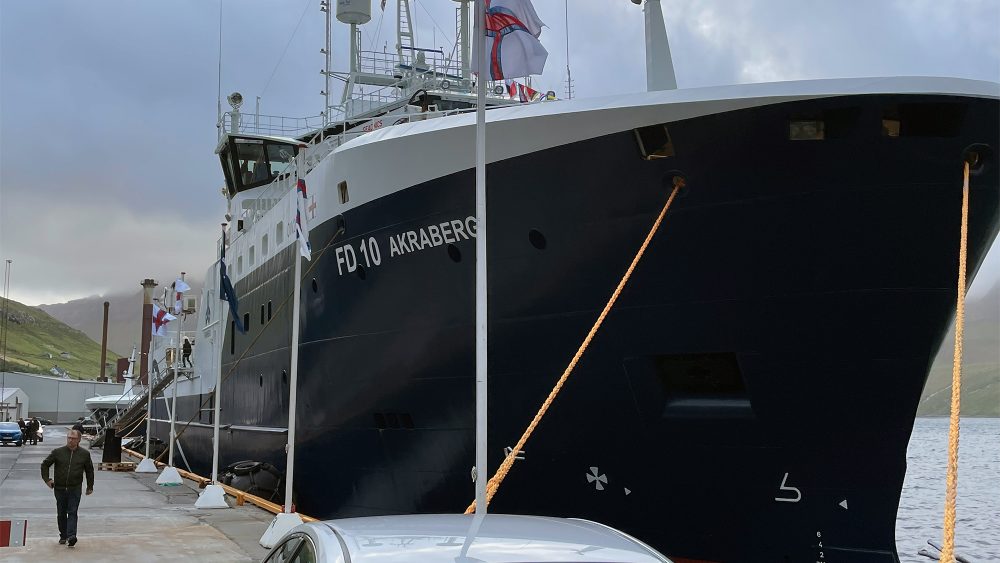 One of the most advanced factory trawlers in the world: Akraberg

“This is a very advanced ship,” said Bergfrost managing director Símin Pauli Sivertsen. “Working conditions for operations such as discharging of frozen catch have improved compared to the previous Akraberg, and this contributes to making work easier for us as well. The goods had  already been placed on pallets in the hold, so moving the pallets onshore and into the cold store was quick and hassle-free. The new Akraberg’s safety cage for unloading also made the job even safer compared to earlier.”

Akraberg’s freezer hold can take up to about 1000 tonnes of headed and gutted whitefish. Furthermore, the vessel has 550 m3 ensilage tanks for landing biomass that can be processed further ashore.

Akraberg returned to the fishing grounds in the Barents Sea after having landed her first catch and various adjustments made to deck equipment. The number of crew including skipper totals 23.

The Akraberg is expected to make two additional landings this year.

“It’s too early at this stage to say when we expect to trawler to conclude this fishing trip,” Mr. Sivertsen noted. “I would assess, however, that there will be two more landings from them this year”.

Akraberg was handed over to the owners on July 1st, and is the first of three new factory trawlers to be delivered to the Faroe Islands for a considerable period. The other two trawlers, Gadus and Emerald, are currently under construction in Turkey, expected to be completed this year or next.

Akraberg is also Framherji’s first newbuild and the first newbuild trawler since 1977 to be registered at Fuglafjørður. Unsurprisingly, the first arrival of the vessel Fuglafjørður on August 18th sparked a great deal of public interest, with hundreds of people gathering at the harbor to take part in festivities and use the the opportunity to go aboard the magnificent ship and have a first-hand look.

“One of the most advanced factory vessels in existence,” Hook & Net called the 84 meter long and 16,70m wide trawler. Akraberg “incorporates a wealth of technology with its advanced catch handling systems for both whitefish and shrimp. This includes live fish tanks to keep fish in peak condition before processing in the 100 tonne/day capacity factory deck … incorporating a bank of twelve … vertical freezers.”

This is one of the first stern trawlers outfitted with the SeaQ Energy Storage System, a battery system that can be fed with power from the permanent magnet winches, and this is harmonized to function with the SeaQ Power Management System for integration with the hybrid diesel-electric propulsion and the 316kW/h battery package.

The deck system is supplied with an all-electric package of equipment. The 4800kW main engine and 1790kW auxiliary engine route power to the reduction gearbox and from there to the 4000mm diameter propeller with a maximum output of 5700kW.

A heat recovery system increases overall efficiency even further, while the propulsion system as a whole is compliant with the stringent DNV-GL Silent F standard.